Frank O’Brien, (BUSINESS IN VANCOUVER) — Metro Vancouver’s industrial vacancy rate, which hit a North American low of 0.1 per cent this year, according to Colliers, has eased to 0.5 per cent due to a huge increase in supply, a new Cushman & Wakefield market survey says.

“The vacancy rate will likely bounce in the 0.5 per cent range for the next few quarters,” said Derrick Gonzales, a research analyst with the commercial real estate agency, who noted that this remains a historically low number.

Up to 80 per cent of the new space being built has been pre-leased or pre-sold as strata, Gonzales estimated.

This is good news for developers but bad news for tenants who are facing dramatic increases in lease rates and dwindling options, according to Cresa, a Vancouver-based occupier-focused commercial real estate advisor.

“The distress for warehouse users continues with region-wide vacancy falling to a crippling 0.57 per cent, down from 0.62 per cent in the fourth quarter [2021], and 2.1 per cent a year ago. Per-square-foot warehouse rents jumped by $0.63 during the first quarter to $16.78 and were up by $2.09 from year-ago levels,” its report concluded.

Industrial lease rates increased to an average of $18 per square foot in the second quarter, Cushman & Wakefield reported, with some markets flirting with $20 per square foot for new product. 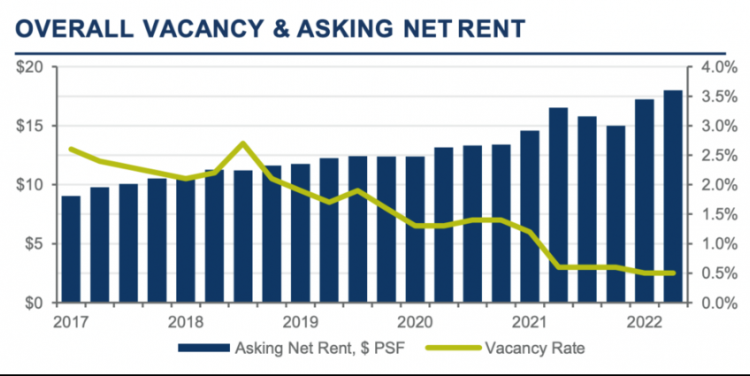 Several additional projects are slated for completion in the second half of 2022 and Gonzales doubts they will have any problem being absorbed.

“Wholesale trade and third-party logistics groups are looking 18- to-24 months in the horizon in securing industrial space in an extremely competitive supply-constrained marketplace,” he noted in the report. “This quarter, Conwest fully leased its large bay multi-unit development at 1725 Coast Meridian Road in Port Coquitlam one quarter prior to completion while Beedie fully leased its multi-unit project at Parallel 32 in South Surrey’s Campbell Heights which is scheduled for a fourth quarter of 2022 completion.”

But, with interest rates increasing and lease rates skyrocketing, Gonzales cautions that smaller companies may be muscled aside in the hunt for Metro Vancouver industrial space.